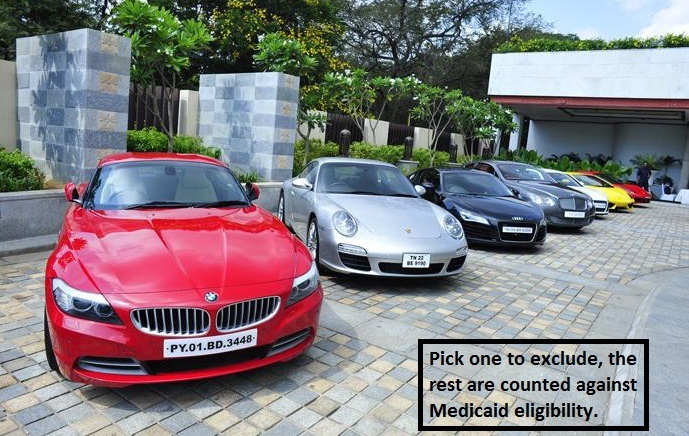 Can I own a car and qualify for Medicaid?

Yes. You can own an automobile and qualify for Medicaid.

According to the Florida ESS Policy Manual, Section 1640.0583 and Section 1640.0591 explain that a single automobile (car, truck, motorcycle, etc….) is excluded as an asset regardless of its value. This means you can own one Bentley worth over $100,000 and that vehicle would not be counted by the Department of Children and Families (Florida’s Medicaid agency) as an asset for the purposes of determining whether or not you pass the “asset test” of having more than $2,000. So, if you own one brand new BMW 5- series and otherwise have less than $2,000 in assets, you pass the Medicaid asset test!

What if I own more than one vehicle?

After the first vehicle (you would choose the vehicle of highest value) is excluded, Medicaid will treat the equity value (i.e. trade in value less any debt owed on the vehicle) of other cars, trucks, and motorcycles as countable assets. An automobile’s trade-in value can be verified through the

There is an exception (found in ESS Manual section 1640.0591, fourth paragraph), which says that if the Medicaid applicant owns other vehicles, which are over seven (7) years old, you can exclude those vehicles as well.

So, if you own one Bentley, a 2009 Dodge Caravan and a 2006 Toyota Camry, these vehicles can all be excluded.

BUT, as is so often the case in the law, there are exceptions to the exception. Second, third, etc… automobiles may be counted against the Medicaid applicant if:

(1)  These vehicles are luxury cars (examples given are Mercedes, Cadillac, Lincoln, Jaguar and Corvettes).

(2)   Cars and trucks that are over 25 years old that may be treated as classic cars or antiques.

(3)   Specially modified vehicles (except those that are modified for handicap purposes).

What if the car is unused or inoperable or in need of repair – is that still counted?

Yes. It does not matter if a second car is, in fact, unusable. The manual specifically instructs the Medicaid application examiners to count all types of second vehicles (subject to the Medicaid exceptions above).

Can my spouse and I both own a car if one of us is applying for Medicaid long-term care benefits?

Often, couples come to us where one spouse is sick and in need of long-term care and the second is relatively healthy and still able to live at home. The well spouse, in Medicaid parlance, is referred to as the community spouse. In general, assets owned by one spouse are counted against the other spouse for Medicaid-application purposes. But there are two ways this situation can be handled.

2.      Spousal Refusal. While well spouses are often expected to take care of their sick spouses, the law does not require them to utilize their own assets to do so. There is a concept, familiar to all Elder care attorneys who handle Medicaid planning, referred to as “spousal refusal” or “just say no.” Spouses are allowed to transfer any assets between each other without triggering a penalty  – i.e. it’s not considered gifting. So “just say no” or “spousal refusal” simply involves the Medicaid applicant transferring certain assets to the community spouse and having the well spouse refuse to support the sick spouse. I will discuss this topic further in a future elder care attorney article (as it has its drawbacks and risks).

But this is certainly a concept to discuss with your elder law attorney during the consultation and a viable Medicaid planning option.

To learn more about what other assets are not counted by Florida Medicaid, click the link.